Red Baron game is an Aristocrat title that is based on a legendary German fighter pilot christened Red Baron, who won over 80 battles. The slot features old-school animations and graphics that give players a feel of the First World War. It has an interesting design and captivating retro-style gameplay. With 5 reels, 3 rows, and an impressive 243 ways of winning, it is clear why this slot is popular.

The slot is also a popular choice for slot game enthusiasts who are high rollers and love the highly volatile slots. This is because it has an interesting bonus feature that awards players up to 15 free spins. By predicting how many planes will appear on the reel, players can get rewarded with a multiple of 140 times their bet.

Red Baron slots were released in 2015. While it took a bit of time to catch up due to its old-school graphics, it soon became one of the most popular pokies from the Australian developer. It has the gaming betting mechanic and a bonus feature that makes it irresistible to play.

Red Baron has several features such as the wilds, scatters, free spins function, and the gamble function. Players are supposed to wager a minimum of 25p in every spin. The maximum bet amount per spin is 50 pounds.

The reel power is more rewarding as compared to the traditional payline format. Rather than a limited line number, wagerers can win in 243 when the whole board is active. When the symbols of the winning combinations are next to one another, from the left to the right, it results in a winning line, including the scatter symbol. In other words, this is equivalent to having 243 paylines without the need to pay for every bet to be enabled.

By reducing the number of active reels, you can lower your winning chances as you will not be paying for all paylines.

Red Baron game has a free spin feature, a guessing game, and multipliers that can be a bit confusing. This is why playing free slot games is important. This can also offer the gamers an opportunity to understand the features and bonuses before betting for real money. One of the ways to play the free slot is through the Hearts of Vegas app.

The online pokie features historic symbols such as the image of red baron, his red plane (Albatross), crosshair tagger, and other symbols from the 1900s. The game is set on a bright blue sky with some clouds.

Bettors can bet on the Red Baron pokies with an amount of $0.25 to $50 per spin. After choosing the bet amounts, players can then choose the various ways of winning ranging from 3 to 243. To start playing, wagerers will need to press the play button and roll the reels.

The game doesn’t have an auto spin feature. If there is a symbol that lands on the left or right in the consecutive reel, this will be included in your winning combinations. This is similar to how the scatter symbol works, offering a maximum of 243 winning ways.

Red Baron has a maximum spin amount that isn’t huge, making it a good choice for the low rollers as compared to the wagerers with big budgets. 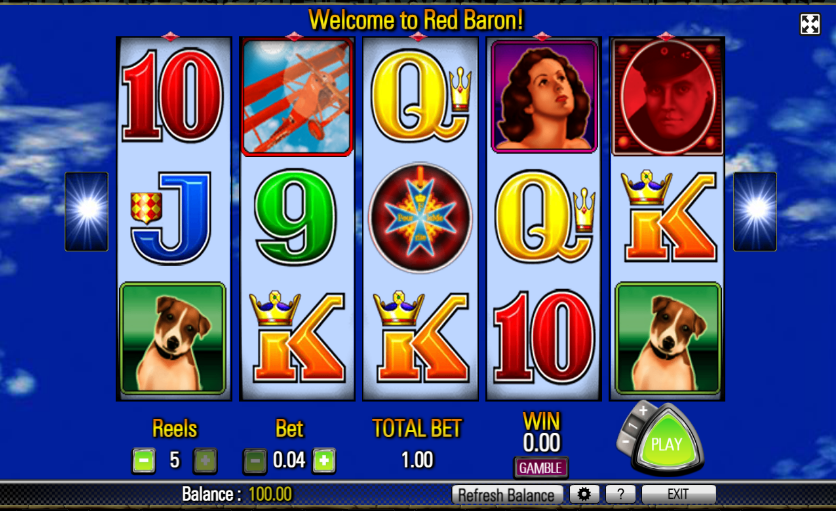 The slot features two bonuses and this is a bit strange for a retro slot. Wagerers will win the first jackpot when they land on an iron cross symbol in the reel’s middle. This causes the table to turn into wild, and this may create a winning combination. When that happens, a player is given free rounds that have a multiplier of 8 times.

The scatter symbol is the target and only comes in the reels in the middle (two, three, and four). All scatter wins get multiplied by the total bet. The free spin is usually activated by landing on three targets and you are given 15 free spins. There is also a new screen that pops us, giving you an option to choose between five missions.

Every mission features different plane numbers and has a multiplier that is attached to the mission. The more planes you can manage to accumulate, the bigger the multiplier. Bettors should avoid getting too greedy unless they are high rollers or they like the big thrills. The numbers of planes in the missions are a minimum of 4 planes and a multiplier of ten times with a maximum of 140 times. Players can choose from one of the following missions:

Bettors are supposed to bet on the number of plane symbols that will appear during the feature. If their guess is right, they are awarded a multiplier of the mission they chose. If they are unable to get enough planes to compete in the mission, they only get the payouts they won without a multiplier. There is an iron cross medal that acts as the wild symbol during the feature, appearing on the reel in the middle. If a win has a wild, it is multiplied twice, thrice, or five times.

Gamers have an opportunity to gamble their winnings in the Red Baron Pokies. All they need to do is to click on the gamble feature located under the reel. They can double or even quadruple their wins by simply guessing the suit or color of the next card. Wagerers can only make a maximum of five correct guesses

How to win on Red Baron Slot Machine

To win on this slot, wagerers will need to land winning combinations of at least 3 symbols. However, the biggest wins are usually in the bonus game as shown above. Under the spins, players can win a maximum of $37,500 on one spin, making it one of the most lucrative functions. This is 750 times the highest bet amount of $50. Even where the multiplier fails to reach its highest amount (a rare occurrence), bettors can still win some great prizes under the free spin rounds.

When the slot has similar randomness for all players, wagerers should bet in moderation (especially at the start) when selecting a mission. This is because they can reduce their chances of winning if they pick several symbols that are higher than the number of free spins. This is why they should go for an initial mission of between one and three.

There is no doubt that Red Baron is one of the best slots that gamers can play. It features an innovative spin feature with some great multipliers, allowing players to win great prizes. Bettors should, however, take note that the game is highly volatile and should, therefore, be ready to lose more than they win. But when they win, they also get a handsome amount. Therefore, this is a great pokie that is worth playing.

Here are some of the frequently asked questions on the Red Baron pokie machine.

What is the RTP of the slot?

Is the slot safe to play online?

Yes, the online pokie uses a random number generator that ensures fair gameplay. As long as gamers play in a trusted casino that uses SSL encryption technology and the necessary firewalls, their money will remain safe.

Are there any drawbacks of Red Baron?

By looking at the features and gameplay, one of the downsides of the slot is that it has a decreasing wild symbol. Where a player uses the Xtra Reel Power setting to wager on more than three-reel, they only get the chance to score a single wild. This also applies to the scatter symbol.

Is there a gamble feature on the mobile slot?

No. The mobile version of the game doesn’t come with a gamble feature. Therefore, players who need to use the gamble feature should ensure that they play on PC, where the interface has a gamble button.

Does the online pokie have a progressive jackpot?

No, the slot doesn’t have a progressive jackpot.