Choy Sun Doa is becoming one of the most popular titles in the gambling industry. Choy means prosperity or wealth in Chinese. Therefore, the name of the title is God of Wealth. The online pokie is another slot from Aristocrat, a renowned developer of online casino games. It features 5 reels and 243 paylines. This means there are 243 ways of winning when playing the video slot, providing gamers with high chances of winning. The game is popular with newbies and seasoned professionals mostly because of its fun and thrilling experience and a big payout. The slot is also quite intuitive to play.

Choy Sun Doa features the Chinese God of Wealth on reel 2, 3, and 4. While he looks like a medieval Chinese Emperor, this is the wild symbol of the game and replaces all other symbols apart from the Scatter. The slot uses an oriental theme with different buttons with different functionality. For instance, there are reel buttons that allow players to set the need to use. There is also a bet button where the set coin can be set from 0.02 to 4. When the bet is set to the maximum range, players can activate all the reels of the slot.

Choy Sun Doa free slot also features an autoplay button that enables reels to spin for the chosen times. The pokie also has a spin button allowing wagerers to control reels when playing the game for real money. The game features simple reels, that make the symbols, colors, and designs stand out. The eyes are drawn by some bright primary colors and the playing cards represent the lowliest symbols of 9, 10, J, Q, K, and A. The relevant symbols represent the winning lines apart from Choy Sun Doa.

Choy Sun Doa features the basic sound, allowing the slot to speak for itself. The reel makes a clunk when landing, making it look bigger while cheering sounds celebrate the wins. Unlike other pokie machine games, the sounds aren’t annoying or intrusive, enabling gamers to focus on their game.

This slots game uses win systems where the winning combinations should start in reel one while moving left to right on the adjacent reels. However, the symbols can appear in any location of the reels. Instead of controlling win lines, the player can choose the number of reels they would like to play. When they play 3 reels, players will have 27 ways of winning. Where the gamer plays all the 5 reels, they will have 243 winning ways.

The main symbols of the slot machine are:

Choy Sun Doa slots are available for free play with no deposit and no download needed. This can give the player a chance to experience the slot without wagering real money.

The game also has some musical note icons allowing gamers to toggle the sound on and off together with an information button that provides access to the paytables of the game and its features. Newbies in online pokie can understand the game very fast.

The title can be played in brick-and-mortar casinos and online. Once a player has begun to play for real money, they need to ensure that they are wagering the right way. To select coins, when playing for fun or real money, all the player needs to do is to click a large spin button on the reel’s right-hand side. They will be taken to a new screen where they select the number of reels they can include in the game.

After that, they should pick their coins from the pre-selected number of automatic spins so that they don’t keep clicking or tapping the button every time they want to spin the reels. Gamers can play with a good choice of coins that ranges from $0.01 to $4 per spin. They can choose the amount depending on how much they are winning or losing.

The poker has an auto spin feature that allows players to choose from 5 to 100 spins, increasing in increments of 5 every time. If a bettor changes their minds in the middle of the game, they can click or tap the spin button, which can change to a stop button in the autoplay to cancel again. 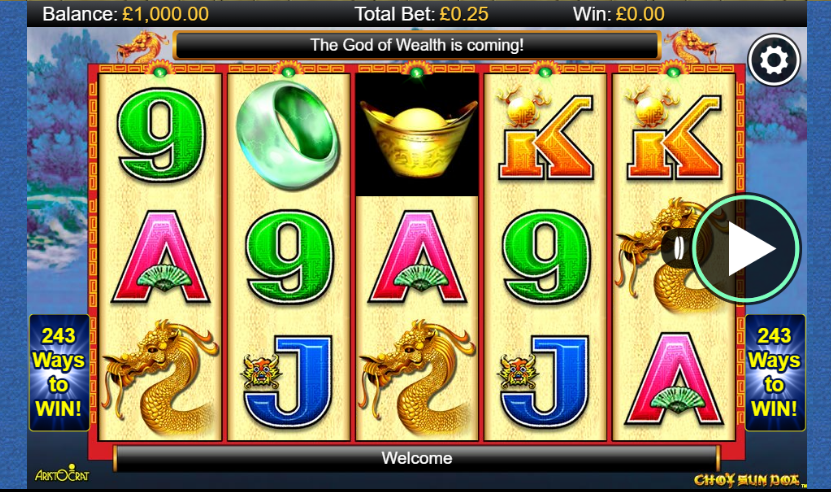 The bonus feature in the Choy Sun Doa acts as the scatter symbol and triggers the bonus. With the bonus feature, players can retrigger the free slot. If a player triggers a free spin bonus round when playing the bonus round, they will be required to first finish their current bonus rounds before they are awarded more potential multipliers with three games. After making their choice, they will need to play another set of free spins that were triggered in the first round.

There is a small sub bonus in the game. When a player hits 3 packets between reel one and 5, this triggers a random bonus multiplier. This increases their credits, twice, 5 times, 10 times, 15 times, 20 times, or 50 times. This means if a player is playing with 25 credits, the maximum amount they can win is 1,250 credits.

There are five choices of free spins:

How to win on Choy Sun Doa Slot Machine

Players should be on the lookout for the Golden Dragon as it pays the most. Five of them usually pay 1000 coins. To increase their wins, gamers can trigger the Free game function, where they will encounter 5 functions.

While the online pokie has a maximum of 20 freebies that can be triggered, if a player chooses a smaller number of free spins, they get a maximum multiplier of up to 30 times. The highest spin number with low multipliers can put the player’s money at a risk. Therefore, they should choose their bet amounts carefully.

Choy Sun Doa has a solid gameplay with an intriguing reel number. The number of ways that players can win on the slot is a nice perk. This is on top of the fact that it’s a low-budget slot that will fit the budgets of most players in Australia and the rest of the world. To determine if this is the right slot for you, you may want to try out the free demo. This will help you experience the settings, controls, and gameplay so that you can make an informed gaming decision

I Is there a gamble feature on Choy Sun Doa?

No. There is no gamble feature on the game.

How is the volatility of the game?

The online pokie offers an interesting gaming experience, with numerous wins to keep the player going. You can expect a win rate of about 30%.

What is the return to player (RTP) of the pokies?

Can I play Choy Sun Doa for real money online?

Are there special bonus rounds on Raging Rhino?